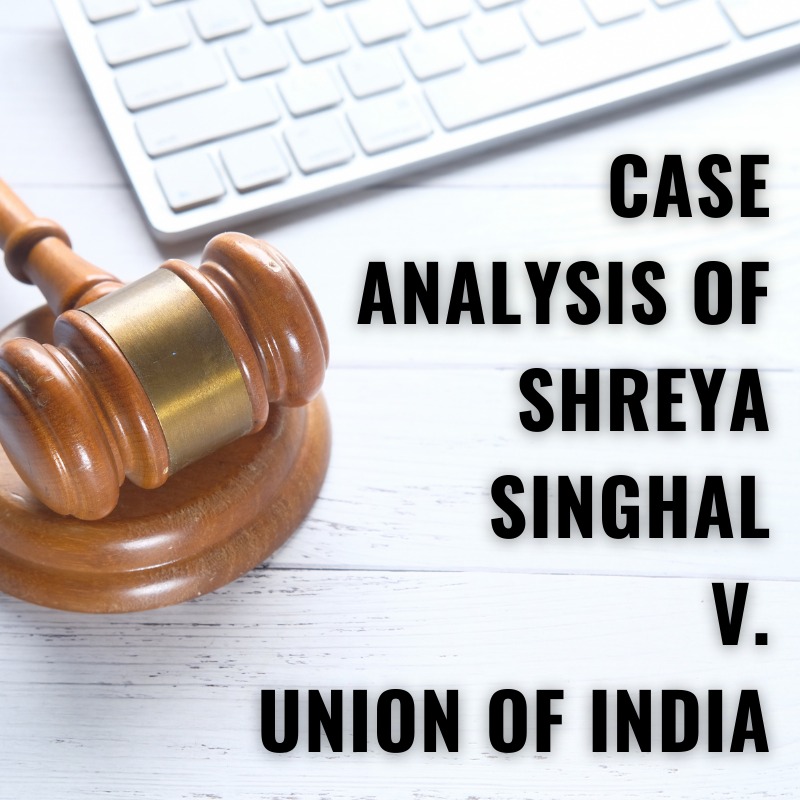 “The Supreme Court of India had to strike down Section 66A of the Information Technology Act, 2000 in 2015 1 And it was also deemed as an ultra virus to the Indian constitution”. In addition, the section has limited the interpretation of essential legal provisions relating to intermediaries. Section 79 of the Information Technology Act defines intermediaries. The Hon’ble Supreme Court further argued that intermediaries are compelled to remove block
content upon notification or direction from the court. And such orders should only be received from a government agency or a court, rather than relying on intermediaries’ decisions.

Facts Of The Case

In 2012, the Mumbai police detained two females, Shaheen Dhada and Rinu Srinivasan, for using social media to voice their views on a bandh called in response to the death of Shiv Sena chief Bal Thackery. On the social networking site Facebook, Shaheen, and Rinu expressed their opinions on the bandh. Mumbai police detained them for expressing their views and opinions on the internet2.

They were eventually released from police custody, but the incident drew widespread notice, and the posted opinion received a lot of backlash on social media. As a result, the situation was deteriorating. To combat this, the two ladies filed a petition contesting the constitutional validity of section 66A of the IT Act, 2000, because it infringed on their right to freedom of speech and expression, which is one of the Indian Constitution’s fundamental rights.3

Initially, the Supreme Court of India had issued an interim order prohibiting arrests on section 66A unless the senior police official approved it.

Section 66A was an antiquated and harsh law that made anything posted on the internet illegal. Section 66A arbitrarily and disproportionately infringed on every Indian citizen’s right to freedom of speech, granted by the Constitution. It also threw off the delicate balance of such rights and the reasonable limitations placed on them. Section 66A was illegal because it was imprecise, overbroad, and lacked comprehensive explanation. This section is likewise illegal because it impeded a person’s innocent freedom of expression and was susceptible to being misunderstood in such a way that it would generate confusion in a person’s thinking about what was allowed 5.

There is a difference in capacity between the mediums, as the internet provides a platform for anyone free of cost, and his views can be expressed without any buffer. There it was necessary for both the offences to be tried separately by the legislation.

The power to issue orders to prohibit public access to material through various computer sources is covered under Section 69A of the statute mentioned above 6. To begin with, only the Central Government has the authority to block information, and only if it is satisfied that withholding such information from the public is required. Second, such necessity can only be imposed on the subjects listed in article 19(2). Finally, under Article 226 of the Constitution, the reasons for the information blockage must be stated in a writ petition. A blocking order can only be issued after a series of procedures have been completed, and a certified copy of a court order is required. Thereby rules were not unconstitutional and are constitutionally valid.

Section 79 of the IT Legislation as part of Chapter 12 of the act and exempted intermediaries if they met the standards outlined in Section 79(3)(b) of the act. And it must be read out so that only government agencies or court orders have the authority to remove or disable access to certain materials or information. As a result, unlawful acts beyond what is stipulated in article 19(2) of the Constitution are not covered by Section 79 of the act. As a result, Sec.79
can be argued to be genuine. 7“ Section 118 of the Kerala Police Act was violative of Article 19(1) and there is no defences such under Article 19(2) of the Constitution. Therefore it had to be struck down.” 8.

Thus, Section 66A of the abovementioned legislation, 2000, as well as Section 118 of the Kerala Police Act, had to be repealed because it tainted the principles upon which the Constitution was established 9 . These sections had to be repealed since they infringe on Indian citizens’ core fundamental rights. Every citizen should have the freedom to voice their opinion and the right to criticize and express their opinion because these are the types of comments that help make society more progressive and democratic. It also strengthens the principles upon which the Constitution was founded.