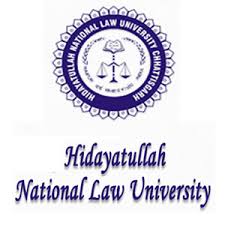 Hidayatullah National Law University has completed the journey of more than one and half a decade. In such a short span of time, HNLU has carved out a niche in the realm of legal education across India and the legacy is soaring towards newer heights day by day.

HNLU is the sixth in the series of National Law Schools across India. HNLU has been included in the list of the Universities maintained by the University Grants Commission under Section 2(f) of the UGC Act, 1956 and has been declared fit to receive Central assistance in terms of the rules framed under Section 12 (B) of the UGC Act, 1956. The university is recognized by the Bar Council of India under section 7 of the Advocates Act 1961.

Dharma Sansthapanartham  meaning ‘for the sake of establishing the primacy of the laws of eternal values.’

International Conference on “Consumer Rights: Issues and Challenge in the New Era” Date: 30th May 2021