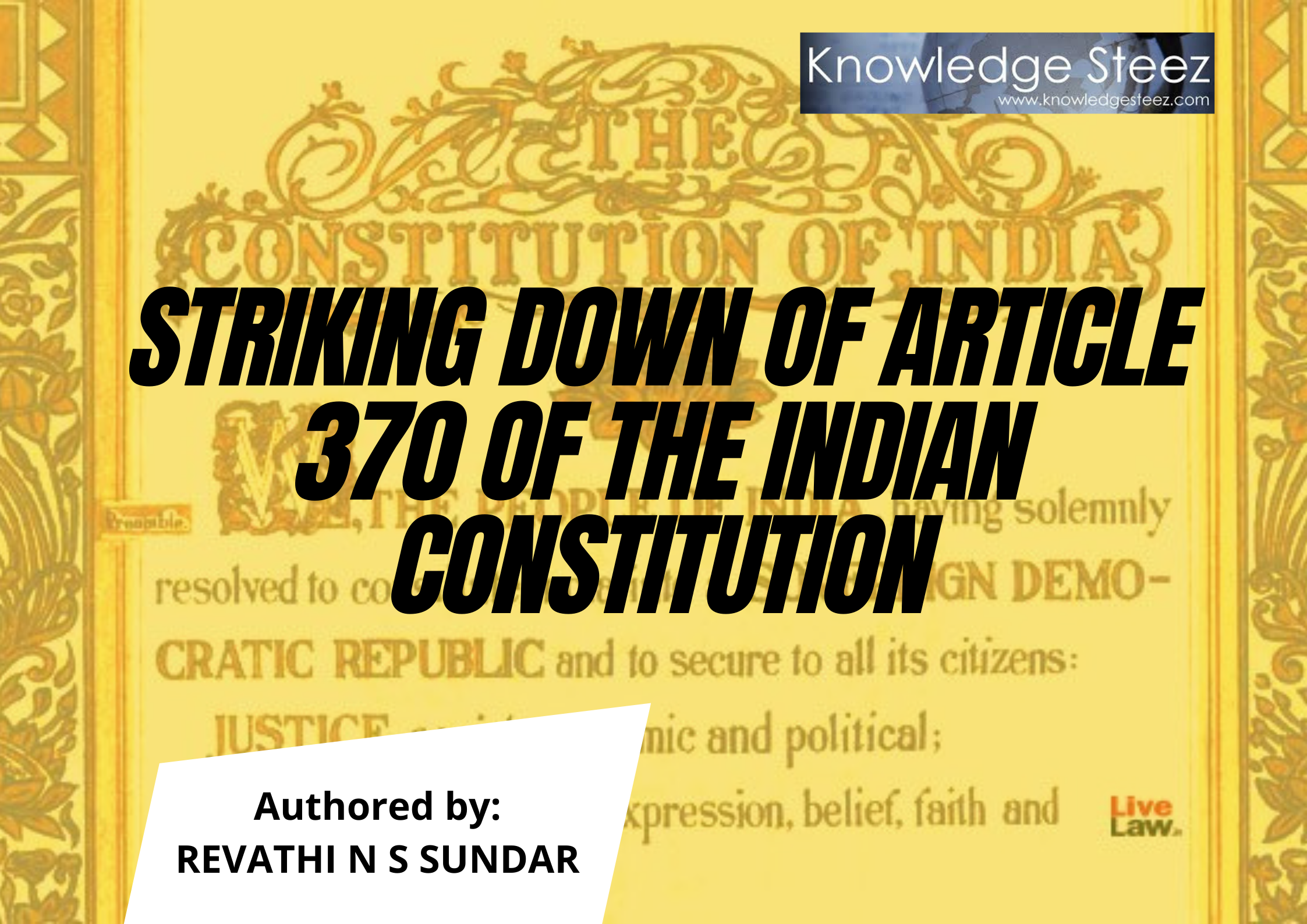 “The principle of Federalism and Democracy are being violated “[1]. Article 370 of the Indian Constitution provides a unique status to Jammu & Kashmir. This State has the privilege to have its Constitution and can exercise autonomy over internal administration.

Article 356 can be viewed with a different insight. Here, the Central government does have direct control over this particular StateState. So we can indirectly say that it is a presidential rule. There is an executive authority that the Governor appoints. Thus the imposition of Article 356 gives an immersive power to the central to exercise control on the State. So instead of Federalism, it provides a unitary form [4].

There have been a lot of situations wherein the Article has been misused. Dating back to history, the Former Prime Minister had misused it to dismiss the majority communist government. He used it as a weapon against the government[5]. Hence, it is evident that it is drastically affecting India’s federal nature because of its unitary character.

So thus, if Article 356 is imposed in the State of Jammu & Kashmir, the locals or citizens of that particular StateState will be affected very badly. And that will affect the autonomous and special status that they have been enjoying for a long time.

Sakaria Commission, in its report[6]Clearly says that, if the constituted ministry has lost its majority without a reasonable ground, it should be allowed to prove its majority through the Floor- test. Suppose the Governor is not sending the report regarding the issue to the President. In that case, it is considered a wrongful act, and there is partial or improper use of power, which again is conferred under Article 356 of the Constitution.

If a government cannot prove its majority and has lost its confidence, we can envisage a failure in constitutional machinery. Thus in such circumstances, the Governor has to send the report to the president. If he is satisfied with the contents mentioned in the report, only in that situation is an emergency proclaimed.

In the year 2019, The opposing party proposed the Constitutional Order to repeal Article 370 and asked for the bifurcation of the StateState of Jammu & Kashmir into two union territories: Ladakh. Ladakh is considered to be Centrally Administered, and Kashmir, which has its legislative Assembly. This was pronounced through the Reorganization Bill,2019.

So, according to  Article 367 of the Indian Constitution, which is also known as the interpretation clause states that now in words The word Constituent Assembly is replaced, and it should be read as Legislative Assembly. Article 370(3) gives power to the president to make this particular section inoperative based on the recommendation. Still, since the State of Jammu & Kashmir is a Union Territory and there was no legislative assembly at that moment, it was then the responsibility of the central to decide on the same. After that, the President made this Article inoperative, which the Home Minister issued through a resolution.[7]

The bill clearly stated that the State of Jammu & Kashmir would be bifurcated into two: Ladakh and Kashmir. Here Ladakh is without the legislature, while Kashmir has a legislative assembly. The Lieutenant Governor will administer both Union Territories. So this was a new turning point for the StateState and citizens of Jammu & Kashmir. The introduction of the Reorganization bill leads to the end of the 1954 order.

Even though there is bifurcation, the Constitution of Jammu & Kashmir and also the Ranbir Penal Code still exist, and the procedures are followed accordingly[9]. The center will have direct control of the enforcement agencies present in the State of Jammu & Kashmir, and law and order are also concerned.

Recreational use of organic drugs to herbs – illegal to legal?

INTERNATIONAL DAY FOR THE ABOLITION OF SLAVERY