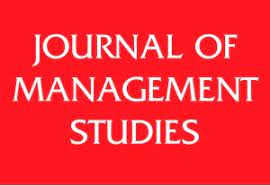 A Special Issue is a refereed collection of articles on a predetermined theme. The theme typically focuses on an area of inquiry that has not been sufficiently explored in management literature, and that is sufficiently broad to be of interest to JMS readers.

Special Issue: ATLAS UNPLUGGED: RE-IMAGINING THE PREMISES AND PROSPECTS OF CAPITALISM FOR BUSINESS AND SOCIETY

Atlas, a Titan in Greek mythology who holds the world on his shoulders and is meant to represent the aggrieved individuals who populate the entrepreneurial and capitalist class and who, according to Rand, support the ever-growing burden of “free riders” and “unproductive parasites” who demonize Atlas even as they add to his burden.
The text has served as a bible to modern industrial thinkers who have, for too long, promoted the false assumption that economic activity is the foundation of civilization, and culture is a mere epiphenomenon.

The flaws in this logic, which Bell (1976) described as the cultural contradictions of capitalism, are only beginning to be fully appreciated. Current financial, political and economic crises, most notably the 2020/2021 covid-19 pandemic and its coordination problems, the 2007/2008 global financial crisis, the looming environmental fallout from climate change, and the rise of populism, have created an extraordinarily perilous situation for much of humanity, but with particularly
devastating effects for the marginalized, the vulnerable and the poor. While productivity and economic activity have increased substantially, most of the benefits have accrued to the few and inequality has increased, suggesting a crisis of the neoliberal governance system (Fraser, 2017; Zanoni et al., 2017). The model of capitalism described in Atlas Shrugged was intended to avoid a dystopian future plagued by excessive government control over business and individual.

This Special Issue seeks to challenge the core assumptions of contemporary capitalism – individualism, instrumental hyper-rationality and unconstrained accumulation of wealth – all of which are premised on a paradigm of non-cooperation (Chowdhury, 2021a) – and to explore alternatives with better societal impacts.

SUBMISSION PROCESS AND DEADLINES
• Submission deadline: 31st October, 2022
• Expected publication: Early 2025
• Submissions should be prepared using the JMS Manuscript Preparation Guidelines.
• Manuscripts should be submitted using the JMS ScholarOne system.
• Articles will be reviewed according to the JMS double-blind review process.
• We welcome informal enquiries relating to the Special Issue, proposed topics, and potential fit with the Special Issue objectives.