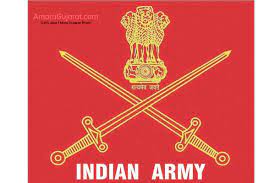 Applications are invited from unmarried male and unmarried female LAW GRADUATES for grant of Short Service Commission in the Indian Army for Judge Advocate General Branch.

(a) Nationality. A candidate must either be: (i) A citizen of India, or (ii) A subject of Nepal, (iii) A person of Indian origin who has migrated from Pakistan, Burma, Sri Lanka and East African countries of Kenya, Uganda, United Republic of Tanzania, Zambia, Malawi, Zaire and Ethiopia and Vietnam with the intention of permanently settling in India, provided that a candidate belonging to categories (ii) and (iii) above shall be a person in whose favour a certificate of eligibility has been issued by the Government of India. Certificate of eligibility will, however, not be necessary in the case of candidates who are Gorkha subjects of Nepal.

Note. Candidates should note that the date of birth as recorded in the Matriculation/Secondary School Examination Certificate or an equivalent certificate on the date of submission of applications will only be accepted and no subsequent request for its change will be considered or granted.

(c) Educational Qualification. Minimum 55% aggregate marks in LLB Degree (three years professional after graduation or five years after 10+2 examination). The candidates should be eligible for registration as an advocate with Bar Council of India/State. Candidate should be from a College/University recognized by Bar Council of India.

(a) Tenure of Engagement. Short Service Commission will be granted to Male and Female in the regular Army for 14 years i.e. for an initial period of 10 years extendable by a further period of 04 years. Male & Female officers who are willing to continue to serve in the Army after the expiry of period of ten years of Short Service Commission may, if eligible and suitable in all respects, be considered for the grant of Permanent Commission (PC) in the 10th year of their Short Service Commission in accordance with the relevant policies as issued from time to time. Those SSC officers (Male & Female) who are not selected for grant of PC but are otherwise considered fit and suitable, will be given options to continue as SSCOs for a total period of 14 years (including the initial tenure of 10 years) on expiry of which they will be released from the Army

(d) Termination of Commission. An officer granted Short Service Commission will be liable to serve for ten years but his/her Commission may be terminated at any time by the Government of India for:-

(e) Reserve Liability. Short Service Commission Officers on release before or expiry of contractual length of service will carry reserve liability to serve the Army for five years plus two years on voluntary basis or up to the age of 37 years for women and 40 years for men whichever is earlier.

5. Training. Duration of training is 49 weeks at OTA, Chennai.

(a) Selected candidates will be detailed for Pre-Commission training at OTA, Chennai according to their position in the final order of merit, up to the number of available vacancies, subject to meeting all eligibility criteria.

(b) Candidates will neither be allowed to marry during the period of training nor will he/she be allowed to live with parents/Guardians. Candidates must not marry until they complete the full training at the Officers Training Academy. A candidate, who marries subsequent to the date of his/her application, though successful at the Services Selection Board interview and medical examination, will not be eligible for training. A candidate if he/she marries, while under training, shall be discharged and will be liable to refund all expenditure incurred on him/her by the government.

(c) All candidates who successfully complete Pre-Commission training at Officers Training Academy, Chennai will be awarded ‘Post Graduate Diploma in Defence Management and Strategic Studies’ by University of Madras.

(d) Cost of Training. The entire cost of training at OTA is at Government expense. In case the Lady/Gentleman cadet is withdrawn from training academy due to reasons other than medical ground or the reasons not beyond his/her control, he/she will be liable to refund cost of training @ ₹ 13,941/- per week till 30 Jun 2022, thereafter a yearly escalation of 8% p.a. will be calculated on the Per Capita Cost of Training for each ensuing year (or as notified from time to time) apart from allied charges as fixed by the government from time to time, for the period of his/her stay at OTA, Chennai.

6. The final allocation of Arms/Services will be made prior to passing out of gentleman cadets/Lady cadets from OTA.